With the CNN Türk live broadcast option, you can watch your favorite programs on CNN Türk without paying any fee, without creating a membership, and only with an internet connection. As the news channel where the events in Turkey and in the world are conveyed in the most impartial, reliable, and accurate way, it produces content in order to convey new developments to you at any time of the day. It is a preferred channel not only in the news branch but also because it has programs suitable for different interests. You can watch CNN Türk broadcast live online from our website for 24 hours and you can both be informed about the programs you watch and discover yourself. You can illuminate the most unknown aspects of the hot topics of the agenda with CNN Türk news programs. 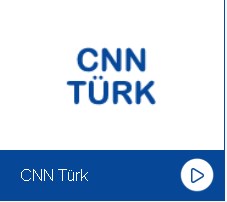 The American company has been broadcasting since October 11, 1999, as the first channel to deliver much news to its audience. Although Doğan Yayın Holding was among the partners of the company in the past, today it is a channel in which TBS and Demirören Holding are partners. In the first period of its broadcasting life, it started broadcasting with the terrestrial broadcast frequency of Doğan Holding's Eko TV.

When CNN Türk first started to serve, some programs were translated directly from English into Turkish and presented to the audience. Although it is a news channel, it has also ensured that its viewers have a pleasant time with its programs in different formats, thus gaining a versatile audience. By purchasing the broadcasting rights of Formula 1 in the past, it has ensured that Formula 1 viewers are locked onto CNN Türk screens for a while.

CNN Türk, whose logo is in the lower right corner of the screen, was broadcasting for a while when its logo was in the upper right corner. Today, CNN Türk's broadcasts can be watched over Türksat, D-Smart, Digiturk, Kablo TV, Turkcell TV+, Vodafone TV, and Tivibu. In addition, with the CNN Türk live watch option, you can watch the broadcast simultaneously from our site. With CNN Türk, which started broadcasting in HD on March 28, 2013, it is possible to access the hottest information about both the country's and the world's agenda.

CNN Türk with its Comprehensive and High-Quality Broadcast Stream

With the programs in the broadcast stream of CNN Türk, you can follow the news not only in Turkey but also in the world. You can learn a lot of information about the economy, sports, health, and life that you did not know before and see how this information can be applied to daily life. With the discussion programs on CNN Türk, you can witness the brainstorming of opposing experts and question yourself on many issues that you think you know the truth about. You can watch news about many branches of art such as music and painting, as well as interviews with artists on CNN Türk screens. CNN Türk, which has many programs suitable for the interests of people of all ages, has a very high quality and remarkable broadcast stream.

Breaking news is conveyed to the audience by the news programs presented by different announcers throughout the day. He has discussion programs called Circle of Reason, Night Sight, Neutral Zone, Turkey's Agenda, What's Happening, and CNN Türk Desk. There is a talk show called Falan Filan. 5W1K and Agenda Special programs are broadcasted so that current events can be conveyed to you. Economic programs in which economic evaluations and future forecasts are made; There are Quick Decision, Private Sector, Parameter, Money Detective, and Economy of the Day programs.

In addition to the programs that will increase your knowledge and general cultural level, there are also programs related to life and health from life. With programs such as Technology Everywhere, Green Nature, and Health Control, you can learn the information you may need one day in your life. If you are closely related to sports; You can find yourself among sports critics on the screen by watching Agenda Football, Agenda Sports, Sunday Evening Football, and Sports Bulletin programs without getting bored. With the CNN Türk watch option, you can watch the program you want on our website, depending on your interests and mood.

Watch CNN Turk Broadcasts Wherever You Are With Your Mobile Devices

It is not necessary to be on the television alone to watch CNN Türk, where every hour of the day is full of programs with a different concepts. Today, when logging into our site from any device with which it is possible to access the internet, CNN Türk can be watched simultaneously with the TV broadcast of the CNN Türk channel with the watch on the internet option. All programs broadcast by CNN Türk can be watched online. You can watch the broadcast 24/7 from your mobile devices, tablets, and computers without problems such as interruptions or freezing.

If there is no television where you are and one of your favorite shows on CNN Türk is about to start, there is no need to worry. Today, it is possible to follow the broadcast stream of many channels and watch these channels over the internet without television. Our site offers you the opportunity to watch CNN Türk's programs in high resolution from any smart device.

When you are going to watch a program broadcast on CNN Türk, you do not have to watch it on fixed televisions, and you do not have to be stuck in an area where there is a television. With your portable or non-portable smart devices, you can continue to do your work or travel while watching your program on CNN Türk. You will not miss your favorite content and you will not be behind in your daily responsibilities.

With the CNN Türk watch online option, there is no interruption in any content you watch on our site. You will not experience problems such as freezing or broadcasting. Even if there are interruptions in your television broadcast, you can finish watching the content that interests you without facing interruptions thanks to the high resolution while watching online.

The content you watch with HD quality has a higher resolution. Every channel you will watch on our site broadcasts in HD. The channel, which has been broadcasting in HD since 2013, ensures that your viewing pleasure is greater with HD broadcasts. With the CNN Türk live HD watch option, you can open CNN Türk with just one click from our site and continue to watch the program you want to watch with high image quality wherever you are. You can open and start watching CNN Türk with your smart devices from any point in Turkey. While watching CNN Turk, one of the qualified news channels, you don't have to compromise on your own standards.

Access CNN Turk Programs With Only One Internet Connection

CNN Turk live STREAM from our site in order to watch the broadcast, it is sufficient to have an internet connection and a device such as a phone or a computer that you can access the internet. Your location, which program you will watch, or how long you want to watch CNN Türk live; is not a situation that affects your viewing quality. You can reach the news that you can follow the agenda of the country and the world in just seconds. You can experience CNN Türk's unbiased journalism by watching it online without needing a television. When you have a lot of work during the day, you do not need to get up and turn on the television to watch your favorite news program while taking a taxi, or sitting comfortably in a room without a television.