With the Habertürk live broadcast alternative, you can watch the program on Habertürk simultaneously, regardless of your location. Although it is mainly news programs, it prepares a broadcast stream that appeals to all segments of society and different interests 24/7 as a channel with content from every area of ​​life. With Habertürk's professional journalism understanding, you can be instantly informed about the agenda of both the world and the country. 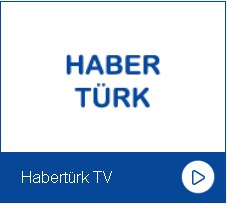 The Address of Journalism in Turkey with a Neutral Perspective Habertürk

Habertürk, which started broadcasting on March 20, 2001; is affiliated with Ciner Yayın Holding. It was owned by Ufuk Güldemir until 2007, and after 2007 it was transferred to Ciner Yayın Holding. Yiğit Bulut was the editor-in-chief and Ali Çağatay was the news coordinator. Today, however, Kürşad Oğuz is the editor-in-chief. As a channel with a large number of popular news programs, it comes to mind with the slogans "The Power is in the Freedom" and "Haberturk when it comes to News".

The channel that can be watched with normal antenna all over Turkey; continues its broadcasting life on Türksat, D-Smart, Digiturk, Vodafone TV, Tivibu, Kablo TV, and Turkcell TV+. It started broadcasting in HD as a high-definition channel on September 15, 2014. Habertürk's logo, which has been in the lower right corner since its establishment, started to be displayed in the upper right corner in 2010. It switched to 16:9 widescreen format on June 16, 2013. It is a news channel that has gained a fixed audience with its news and discussion programs and has developed its audience considerably since the day it was founded. Not only the news on the agenda; economy, life, health, culture and art, conversation, current, sports, and discussion programs are also available. Watch Haberturk online you can watch Habertürk programs wherever you want with the option.

Considering the broadcast stream of Habertürk; There are programs where breaking news can be learned at certain times of the day, discussion programs in the evening, and programs about the economy and life during the day. It includes culture and art programs that can meet your desire to relax and have fun on the weekends in its broadcast stream. In addition to the sports programs where sports news is made on a daily basis, there are broadcasts where you can get information about the matches on the days of special sports competitions.

For those who enjoy the discussion programs where ideas collide, the Press Club has included programs such as Teke Tek, Söz Sende, Turkey's Pulse, Counter Opinion, Enine Longitudinal, and Other Gündem in its broadcast stream. With the Watch Habertürk option, you can follow programs such as Sports Bulletin, Bizim Stadium, and Sportürk, watch sports-related discussion programs, not the agenda. You can take your knowledge of current issues to the next level with the Master of Business and Relatives programs.

Experience Habertürk TV on the Device You Want

You don't have to wait for the TV show to start in order to watch the content you want in Habertürk, which has a full broadcast stream and interesting content at all hours of the day. When you have a job outside, you don't have to make the choice to turn off the TV and go out without watching the show. Watch Haberturk online with our alternative, you can watch Habertürk broadcast live from any device you want, at any place, without television. You can start watching Habertürk broadcasts without a television at your location when you take time for your breakfast, on the way to work, on the way to work, during your evening meals, and to relax on weekends. Instead of looking for a place with television when there is no television in your location, you can start watching Habertürk broadcast live with one click from your smart devices and access the content you want without disturbing your comfort and spending energy.

You can watch Habertürk broadcast from our site in high resolution without sacrificing image quality. With our Habertürk live HD watch alternative, you can continue to follow the live broadcast without experiencing situations that may disrupt your viewing pleasure. Having an internet connection and a smart device with which you can log in to our platform is enough for you to watch Habertürk broadcast over the internet simultaneously wherever you want. You can connect quickly and start watching your favorite programs on Habertürk without missing the programs you want to watch or wasting time.

You can watch Habertürk's content, which is watched with interest, not only in Turkey but also from anywhere in the world, without experiencing problems such as freezing or interruptions in the live broadcast. While the broadcast is in progress, situations such as interruption and freezing of the broadcast may occur from time to time depending on different reasons when you watch it on television. However, as long as there is no problem with your internet connection, you can continue to watch the broadcast from our site even if the broadcast is frozen on the television.

Keep Watching Habertürk Without Being a Member and Having No Commitment

When you decide to use the Habertürk live watch option, you do not need to create a membership on our site, pay a service fee or commit to a certain period of time you will use our site. Whenever you want, you can start watching Habertürk broadcast by entering our site in just a few seconds and you can turn off the broadcast whenever you want. If you want, you can watch Habertürk live on our platform every day, or you can start watching Habertürk by entering our website only on the days when you have a culture and art program that you follow every week and broadcast once a week. You can have a live TV experience by entering our site at any time without the need to deal with membership transactions or to bind money against a certain commitment.

After logging into our site to watch the high-quality uninterrupted Habertürk live broadcast, you can start watching the Habertürk broadcast without having to take any other action or fill out a form, by clicking on the area with Habertürk's logo. While you can watch the interesting programs of Habertürk with just one click, you can also see the programs that are on the air in the future on a single page. You can have a pleasant time with Habertürk, which produces content that will enable both children and adults to have information about the agenda, regardless of day or time. You can be instantly informed about the breaking news and you can witness the comments made about possible chaos that may arise in the future.