With the watch TV 360 alternative, you can watch TV 360's entertainment-oriented programs live 24/7. Broadcasting content that appeals to different segments in every time zone throughout the day, TV 360 promises to provide you with viewing pleasure with the level of entertainment in its content. No matter where you are in Turkey or the world, you can continue to watch TV 360's broadcasts whenever you want via our live TV platform. Moreover, for this, not only the television, but any smart device you want is sufficient. In addition to its enjoyable productions, TV 360 connects you to the screen with its high image quality. There is a broadcast stream mainly of TV series and movies. 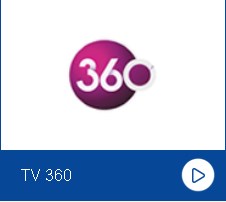 In June 2002, when TV 360 started broadcasting, its name was Skyturk. Although it continues on its way as a news-based channel, it started broadcasting as an entertainment channel on December 1, 2014. Its name was changed to Skyturk360 on January 23, 2012. On 31 December 2013, it started to be referred to as 360 only. The date of September 1, 2017, is the date of HD broadcasting. It is owned by Çukurova Holding from the date of its establishment until 2013. Due to Çukurova Holding's debts, SDIF seized the channel. On November 21, 2013, the channel was sold to Turkmedia Broadcasting Group. In 2014, following its sale, the location of both the logo and the canal building was changed. It also coincides with these years, leaving news-based broadcasting and switching to entertainment-based broadcasting.

It broadcasts on Turksat, D-Smart, Digiturk, Kablo TV, Turkcell TV+, Tivibu, and Vodafone TV platforms. The editor-in-chief is Oğuz Altuğ Demirel. The news coordinator is Şeyda Özşan, the news director is Münir Koçaslan, the economy manager is Uyanış Tuğtaş and the program manager is Kemal Coşkuner. It broadcasts an entertainment program with the slogan of new generation broadcasting. With the TV 360 live watch option, you can watch the programs suitable for the new theme on our platform.

The programs in the broadcast stream of TV 360 are mostly life and entertainment programs. With the new broadcasting approach, programs in areas such as domestic TV series, cinema, current life, sports, religion, documentary, and health have been added to the broadcast stream. You can watch the old episodes of the Eighties and Diriliş Ertuğrul series, which were broadcast on television in the past. There are days when both Turkish and foreign cinema generations are made for cinema lovers. Different styles of films are given in each film generation, from old films to unforgettable films. Traveling, Smile with Azalea, We are in the market, Let the purpose be to live, Tuğçe's Kitchen and The Future is Coming with Birol Güven programs are published under the current category of life.

For those who are closely involved with sports, Sports Night and Var programs have been added to the broadcast stream. For those who want to watch a religious program, the Friday Conversations with Mustafa Akgül program has been included in the broadcast stream. Those who prefer to watch documentaries and those who want to be informed about the program from the sky and health are also interested in the program "My Doctor is on My Side". Although it is a channel that progresses with entertainment-based concepts in its programs; It also includes programs for your special interests, where you can learn about current events, in its broadcast stream. Through our TV 360 live TV platform, you can access the broadcast stream of TV 360, and in line with this stream, you can decide on the program that suits your interests and you want to watch.

You don't need to be in front of the television all the time to follow the entertainment-oriented broadcast stream of TV 360. You can watch TV 360 live from anywhere, on any smart device. You can watch live from your phone, computer, and tablet. With our TV 360 watch online option, you can open the TV 360's programs you love and enjoy in just seconds and start watching them without waiting. You can watch the TV 360 program you want 24/7 from your smart devices, whether it is for fun, learning, or killing time. You can monitor the live broadcast simultaneously with high resolution for 24 hours from your smart devices.

All you need is an internet connection and a smart device that you will not have any problems with while logging in to our live TV platform in order to follow the broadcast stream of TV 360 from your mobile devices. There are no problems such as not opening the program you want to watch, freezing, and interruptions in the broadcast. As a platform that allows you to watch your favorite content live, we ensure that you continue to watch the broadcast live without freezing and without sacrificing your viewing pleasure, as long as you have no problems with your internet connection. You can start watching TV 360 live on our platform with just one click, without making any effort or taking any extra action.

Regardless of whether you are in Turkey or anywhere in the world, when you want to watch live TV on our platform, you can watch broadcasts in HD quality. You can enjoy the program you want to watch more with high image quality. Watch TV 360 live HDWith our alternative, you can get high-resolution images and you can also get the image you get when you watch TV 360 from your smart devices. Since you will be doing your transactions in just seconds with a high-speed connection, you can start watching the entertainment programs you want to watch right on time without missing out. Unless you have a problem with your internet connection and there is no disconnection, you can continue to watch TV 360 broadcast in HD quality. Regardless of the time of the day, the broadcast image quality continues without degrading.

You do not have to pay a fee to watch TV 360's entertainment-oriented programs and series from our live TV platform. You can watch TV 360's timeless series and entertainment-oriented programs by logging into our platform with just one click, without having to sign or approve a contract or fill out the membership form. Visiting our site is enough to experience free live TV.

If you want to watch TV 360's series and programs with high-quality broadcasts, you can watch the live broadcast simultaneously by logging into our site with the TV 360 live broadcast option. You will not pay for this, and you can start watching the live broadcast with very practical steps. In case of any disruption in the broadcast, our expert teams will take care of the issue and ensure that you can access the broadcast again uninterrupted and of high quality as soon as possible. You can watch TV 360's entertainment-oriented programs with a picture quality that will satisfy you, without experiencing freezing problems, by opening your favorite program on the day and time you want. You can experience live TV over the internet by connecting directly to the broadcast, without long waiting times.