Watch A Para HD Live A Para channel is the economic channel established within the framework of Turkuaz Media Group, which introduces the economic agenda to its audience in the best way possible. The channel started broadcasting on 21 June 2017 with a test broadcast. A Para channel, which makes its first test broadcasts in 1080i format, is a television channel that presents all news about the economy to the public. A Para channel attaches importance to sharing all kinds of developments related to the Turkish and World economy in its news content. The channel, which runs a program with guests who are experts in the field of economy, presents news to the public on current exchange rates, money markets, gold prices, and virtual currencies. With the A Para watch option, you can follow the pulse of the economy 24/7. 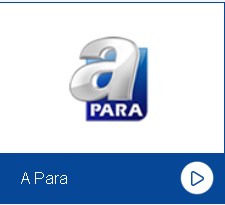 What Are A Para Programs? A Para live broadcast

, the channel with the most comprehensive programs in the field of economy in TurkeyThe channel, which hosts many different programs with economic content, offers various economic programs to people with its expert presenters and guests. The channel says hello to the day with the Morning in Economy program on Mondays, It presents various programs such as A Para Today, Economy Media, A Para Day Midday, A Para Agenda, Money Direction, as well as economic developments related to Turkey in general. As the last program of the week, the day ends with the End of Day and Watch program. It is the economy channel with comprehensive content that you can follow. On Tuesdays; Starting with the Morning in Economics program, Bank Account, continues its broadcasting life with special publications such as SME Platform. On the A Para channel, you can follow the most watched programs on Wednesday, such as Turkish Job, Farm to Table, and Time to Participate.

Shown as the crown jewel of the Weekend

Economy news on A Para, the A Para channel continues on Thursdays with the Energy Line program, where developments in the energy field are discussed. In addition, the Shopping Time program, which is followed with enthusiasm, is a program followed with interest by shoppers. Watch A Para live you can instantly watch the programs broadcast all day of the week with the options. On Fridays, you can have fun with the programs "Stars of Export" and "The Fabric of Economy", which are programs that generally think about investors. On the weekends, the Thematic Documentary Generation program, in which various documentaries are shared during the day, is broadcast on the channel. The sports economy continues with programs such as A Plus Tarım Dünyası and broadcasts again.